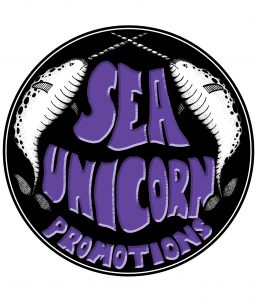 Unicorn Records is a record label and promotions company based in Ashford, Kent. The company was founded in 2017 and manages bands across the country, as well as organising live gigs in the Kent area for up and coming bands. The company is also commonly referred to as ‘Sea Unicorn’ Records or promotions due to it’s logo which depicts a Narwhal, the creature whose horns were often sold as the spoils of arctic fishing trips under the pretence that they were from the mythical creature known as Unicorns.

Notable artists under Unicorn Records include Peter Chisholm, known as ‘Lives’. Originally from Cornwall, the ex-surfing champion now focuses on writing music that transcends genre norms and crosses over both Rock, acoustic and Pop tracks. Lives has worked with Bob Geldof, James Morrison and most recently supported Ralph McTell.

The Next Event by Sea Unicorn Promotions

Tickets for Unicorn events are sold at https://www.seetickets.com